Welcome to a glimpse into the watering hole! 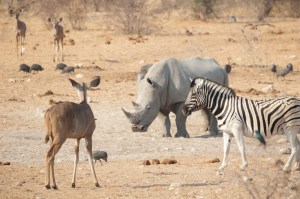 In the jungle also known as Free Life Chapel there are animals of all sorts and walks of life, each Sunday morning is like a safari ride – everyone is in the same house, but each department is kind of their own species. The greeters are the monkeys – carefree and friendly, while the security team are the kung fu pandas – that’s all I’m gonna say about that (don’t test them). We each have our own characteristics and traits that make Sunday go ‘round, and no Sunday would be made possible without the mix of them all.

Some more aggressive than others, and some goofy, while others quiet and observant – but there are a few who gather each week around a watering hole, to bring perspectives of the like and execute tasks according to his make-up of talents. Without the differences and never ending debate, we would never end a meeting or produce a service on a one accord.

From there, the single plan is delivered to departments and executed with passion, creating what we all know as the Free Life Chapel worship experience.

It’s a rare sighting when the mix of movers and shakers gather together, and I will never forget the first time I witnessed a creative team meeting at Free Life Chapel, which kind of resembled– or was an exact remake of something I must have flipped through recently. You know, the Discover Channel documentaries about Lion herds and how the “head honcho” kills their prey and brings it back for the herd to feast on. Feeling like a safari guide sneeking up on a rare glimpse into this society of a group of people who are all different, trying to come to one idea. I don’t think I spoke too much, because all I could think was how amazed I was at the process that was unfolding around this ‘watering hole’ of thoughts. Like I had just flipped channels and couldn’t peel my eyes from the action.

Yep, pretty much a swamp of creative juices.

There is a list of topics – holidays, projects, series, ideas, new elements, etc..

There is a group of people.

There may or may not be food.

There are always lots of rabbit trails.

There are hilarious ideas being subtly shot down.

And other ideas being simultaneously praised and developed.

But at the end of it, there are at least three weeks worth of projects taking place in tandem, spread between about 15 people (definitely not evenly – shout out to Jon, Lindell and team) and my job consists of exactly four things: 1. take notes, 2. sit in amazement, 3. comment when/if I feel necessary (which is pretty much never) and 4. not get distracted and fall behind on my notes because I’m sitting in amazement.

It really is a fascinating sight for an administrative girl such as my self, in a room full of fully 100% creative minds – with no concept of price, time or agenda (figure all of those things out along the way) – and amazingly, it works that way. Go as far creative as possible, give the pieces to be researched to an administrative person, and then begin to cut, chop and rebuild.

I continually remind myself of the concept of the “CREATIVE meeting”. All of those things that I was dying to do (list and call and plan and map) take place after the meeting is over, so I have to consistently remind myself that this administrative girl is not on my turf, but in a herd full of creative thinkers, so I tread lightly, and wait for the tasks to be delivered for execution.

The process begins when Scott Thomas (senior pastor of Free Life Chapel) or someone else who has observed something in the world that should be pulled off as our own, throws out an idea, and it lays there, lifeless and void; and I kid you not, those around the watering hole begin to pace (in their heads, but I know it’s happening because I can see it as their eyes begin to shift and they fidget) I’m telling you, right out of the documentary:

At first, it’s subtle and everyone is questioning what the plan of attack is, or if the idea is ready for attack at all. Then one brave soul will begin to slowly circle the idea, observing the thought, and then throw a test comment out. Once that comment is received or rejected, everyone gets a feel for where the idea lies and all begin to pounce. Before you know it, words are flying, agree, disagree, debate, like-it-but-add-something, hate it, love it, check into that, never gonna happen, and then eventually once the group has let the last piece go, a simple idea is developed into one of two things: it has either been torn into shreds and lies just as lifeless as it was delivered – a carcus in pieces – or it is torn into shreds and underneath the initial form lies a distinguished masterpiece; probably more developed than it had ever been intended.

That first day I was like the scared animal watching from the back behind a tree, some other days I still find myself staring in amazement, and rarely I’m that first brave soul to take a test shot at the idea that could potentially be a revolution; but every Tuesday, assuredly, I can be found around the watering hole, taking my notes, trying to follow rule number four, and just waiting to be delivered my portion.

2 thoughts on “Behind the Scenes: FLC Creative Team Meeting”