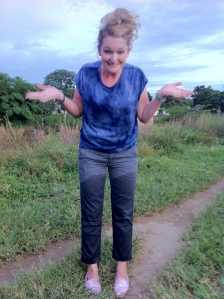 I’m usually not the kind to use such phrases to begin my tale, but man-o-man is this a doozie. In the words of Mami Mya, this is truly “the stuff of blogs”.

It won’t be long at all. I’m not gonna detail it out or give the meaning of it all. Just the story as it happened and the hilariousness of what turned into my Saturday night.

Once Upon a time, in a land far, far away (actually about 40 miles from Florida, but whatever) I was crossing the border from Haiti to the Dominican Republic about 5 minutes after the border was closing. As we pulled up to the guard, who fully knows who we are and what we do because we cross at least once each way every day, looks back at us, pushes about 10 or so Haitians from wiggling through he doors and snaps the lock closed. We all hustled to it and threw our stuff across the fence and climbed around the gated bridge, about 30 feet above a shallow, mucky, rushing border river.

Once stuck between two countries (literally) we sought out our plan. We couldn’t sweet talk our way over so we crossed back and decided to do it the truly Haitian way. We would cross the river through the water and be on our way to our home in Dajabon, Dominican Republic.

I already felt bad because I have a guest with me and he has never been to a developing country – or any country other than the great ole US of A – and I wasn’t making the best first impression of how Americans should do things while traveling, but ‘When in Rome’, right? So we proceeded without shame and I just casually threw out there that he needed to experience some sort of sacrifice since he has had it pretty nice all week (all generators working, sleeping with air conditioning, 3 big meals each day INCLUDING COKE… you get the picture).

As we approach the river’s edge, where it’s common at this time for locals to be crossing, I was confused as to why, people who I thought were taxi drivers were trying to put me onto their shoulders to carry me across the Massacre River. Uhh, not. I grew up a camping girl so I am not afraid to get me TOMS wet in some waist deep water. But on my way down they were all pulling me and yelling and I finally just had to say (in English no less. They had no clue what the white girl was screaming, but they knew it was spicy… and not a compliment) “STOP. EVERYONE GET AWAY FROM ME.” As I put my bag over my head one of our staff called to me and said that there is a strong current and he had a friend who he trusted who would take me across. So yes, I hopped on the guys shoulders and away we went, illegally, across the Massacre River. I looked to my right and a mom of one of our kids was there doing her laundry under the bridge. She waved and laughed and I blew kisses, but all I could think was, ‘Is this real life?’ and I had to take a picture of what was surrounding me at that moment, on top of that man’s shoulders. True story.

On the other side we had a few things happen:

I was quickly over the intense and threatening attitudes that some of these men had. Trying to intimidate the white girl. Um, not. One thing he doesn’t know is that I may be white and I may have blonde hair, but I’m from Texas and I’m fiesty when needed, so he picked the wrong girl to try and force to give him $20. He was saying, “I’m hungry, give me $20.” I was like “HA! So am I, what does that have to do with anything?” So I went back to the photo that I snapped and could see the shirt that the man was wearing who carried me so I could identify who to pay. And not $20, are they kidding? Maybe like $3. I paid double what I was told to pay and he was happy, but the others wouldn’t leave and we had to sit under a bridge on laundry day and apparently bathing day since there were multiple men and women scrubbing it all down close by.

After a quick deliberation about what to do – do we make a run for it, do we go back, do we yell some more to try and get our way? We had an emergency on the property, as all this was happening, so the rest of our team needed to get across to get to a hospital – so we chose to not take the shoulder route and just wade across – to go back to watch the kids. God knew perfectly what was gonna happen and that we were needed in Haiti for the night. Needless to say, in waist deep water, He made his point.

2 thoughts on “What Do You Mean You’re Gonna Shoot Us?!”