I’m sitting on the floor watching little Alexson sleep. With each inhale I can count every rib in his chest. As I rub my hand up and down his back I can feel the bones in his shoulders protruding out. He has lived with us for a few weeks and looks better than he has probably his whole life. He is almost eight years old and weighs 28 pounds. When he came was so pale that Haitians questioned if he was American. 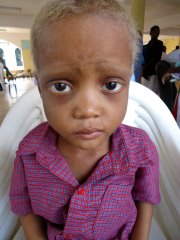 Watching him I am amazed at the children who God have brought through these gates.

Some have a bright hope for a future today because of Danita’s dream.

And others don’t make it.

Some were here for a few months. Some a few days.

It’s unrealistic to say that poverty in Haiti is changeable in a short period of time, or without an unchanging God.

Some people ask, “What’s the point?”

I’m not trying to say that we are solving the problem.

But I can tell you the point.

Even if it was just one – that’s enough.

Whether for a day or a month or forever, God put them in our path so that they would be in loving arms. Instead of a street or a trash can He has honored us with the opportunity of loving His children, no matter the circumstances or length of their stay on earth.

Even if they come to us and then die hours later, God saw them valuable enough to die loved and comforted and in the arms of His children.