Pleiades – a star cluster that covers an emmense span of more miles than we can count in 43 years.

With stars big enough and bright enough for humans to see from earth, yet it is one of the newest star constellations in the universe (not even 100 million years yet… pshhh, baby.) 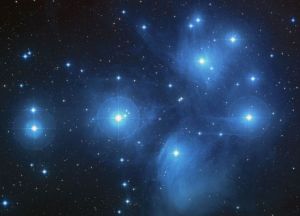 It is one of the greatest marvels of the known universe and yet God says of it simply, “Can you hold Pliates in your hands, Job? Or unloose Orion’s belt…”

To what I can imagine was returned with a humbling reply of, “well.. no.”

“Well then there… because I can.”

He goes on to put His ability into perspective by saying:

“ Then go ahead and man up and answer me this… (Literally, he says it, verse 3)

…Where were you when I laid the foundations of the earth? Go ahead and answer since you have it all figured out…

[Who knew God could get such an attitude?]

…Have you commaned the morning since your days?… Can you guide Arcturus with his sons?…

…Can you lift up your voice to the clouds and make it rain? …

…Can you simply put wisdom and understanding inside of a person’s heart?   Because, I can.”

As if He knew there would be a confused little girl in 2011 with so many questions who would read that statement in all of her frustration and searching for direction, and He would call her by her name in her spirit because He knew that she needed something to cling to and He would say… “But, Hope… I can.”

“So stop worrying about what will happen. Cus i can.”

“Or how it’s gonna work out, because, I can do all of that and more.”

Isaiah 40 says that He measures the entire universe in the span of his finger tips.

And yet we continue to so easily doubt if He is able.

He measures 46.6 billion light years in the span of His hand and yet His eye is on the sparrow.

In all of the constellations, and galaxies, and all the other things that man has not yet been developed enough to see, God sees you and He sees me.

We are known and prized by magesty.

Even the little ones.

How undeserving and how small we are in that spectrum.

When looked at from a far there is no awareness of our posessions, our cars, our homes, glamour or fame. There is no sight of the great need that exists. Merely a mote of dust suspended in a sun beam.

And each of our lives have been lived out on it. Every war been fought on it, brother killing brother.

A tiny little blimp on the radar of history.

I can’t help but conclude that maybe we’re just not that great in ourselves after all.

And yet he knows every hair that just fell out of your scalp.

I think the Psalmist got it right when they said, “When I consider the heavens, the work of Your fingers, the moon and the stars, which You ordained; what is man, that You are mindful of him? and the son of man, that You care for him?”

I can’t help but be consumed with the beautiful cluster of stars called pleiades that is 43 light years wide, yet is held in His palm, and the story that it is telling in the night sky, in the spectrum of who we are in relation to God.

Put into perspective by a single conversation with Job, where God identified the significant insignificance of our lives – how important we are and yet how it’s really just not about us after all.

Just in case you were wondering.

So the next time that you look into the sky, remember the Psalms and give thanks for the heavens, “which are declaring the glory of God… Day after day they utter His words, and night after night they show His knowledge… (V. 26) Lift up your eyes unto heaven, and remember who created them and know them each: He calls them by name and by the greatness of His might, not one has failed.”